Here’s the first of a series of occasional insights into what new FE lecturers face, feel and react to at key times in their first year at college

It’s been so busy - I’ve got a crazy timetable as a new music lecturer, it’s changed several times and I’m getting even busier. But it’s okay. I somehow expected this although it’s been mentally more tiring than the secondary schools I’ve worked in before.

I wasn’t sure just how seriously students would take their subject at level 3, given they were mostly 18 and almost adults. In FE I’d expected some to be motivated and some not - and I was right. But certain classes have proved more immature than I’d thought.

Last week I was surprised when a few second-year Btec students turned up for their second lesson from me an hour late eating fried chicken - and they kept on eating while I was teaching! I looked at them feeling quite angry, though not showing it. They were breaking a boundary so I did tell them off and said it would escalate to class discipline measures if they didn’t conduct themselves properly. Having taught in schools, I know how to be tough! But I also expected a more mature relationship in FE, and certainly at my college where there are also adult learners.

‘I’m not there to baby-sit students’

If I hadn’t reacted as I did, I could have ‘lost’ them. I don’t really mind if they hate me, I’m not there to ‘baby-sit’! [chuckles]. For three years I first worked across primary and secondary schools in a multi-academy trust and then moved to a separate secondary until this Easter when I joined my college.

I felt being a music teacher at secondary school meant pretty much baby-sitting students who aren’t really serious about music - a key reason for moving to FE. Here I wasn’t expecting to shout, or tell students off for doing something wrong, but to share a mutual understanding of behaviour standards. Because I’m new this term, some students will challenge me.

Fortunately, the chicken-eaters have been fine since, so I passed that test; sometimes there is a place for the stick and carrot approach. I’d been firm with them but at the same time was trying hard not to patronise or disrespect them. Meanwhile, some level 3 students have proved themselves very mature, keen to learn and very inquisitive, which I also didn’t really expect. Another surprise.

After joining my college during lockdown this summer term, I led a few online sessions but it was more like mentoring/tutoring and holding one-to-ones. I’d never met the students before. I was a stranger to them. There was much less communication.

My first experience last term of online teaching with level 5 HE students (aged 20-21) was in some ways easier than I thought: I did not, for instance, need to travel as I taught from home. Yet I quickly found I could not really monitor students taking notes or check they were engaged and had understood the subject matter online, even though we shared cameras and screens.

It was also harder to differentiate teaching across a class of mixed abilities. I still gave out assignments but if some students did not understand something, I couldn’t then sit down with them and provide the quick ad hoc support possible in class.

This term, back on campus - at least for now - I can observe students’ reactions and supply help when needed. Today, I held a musicology class with a level 5 group. I had to throw in a lot of new concepts and get them to read the most academic papers they said they’d ever come across. I found it noticeably easier to offer support; I could sense different levels of understanding and repeat or simplify concepts if necessary.

Such interaction is not feasible online, so I hold additional one-to-one meetings wherever possible to provide close support. I also make a lot of comments/corrections to their essays - it’s like micromanaging their work. Online, they can’t see my expressions or hear the nuances in my messages and some probably think I’m being too direct, a bit harsh even, when in fact I’m trying to help them. Some students have reacted negatively but I’m working on it!

It’s discovering the joy of sharing musical appreciation with my students. I started my first lessons for each class by performing a rather advanced solo on the snare drum (I’m also a professional percussionist). The students loved it - they were really surprised how much you could do on one instrument - and I felt that was pretty much the start line with them. We shared a joy, it was a surprise for them, something new. I felt this is what I was expecting.

My level 3 cohort mostly comprises rock music students. One student has also been learning classical guitar before giving it up. But he said hearing me play had reignited his passion for the instrument and he now wanted to audition for a place to study it at the Royal Academy!

In other classes I also demonstrated some classical repertoire on the Marimba, a large, deep solo drum. All students seemed very touched, particularly the classical guitarist.

For me, that’s part of being a music lecturer; it’s not just straight teaching. Working at college with other music teachers who are also musicians, we have to be professional and show our professional standards and that is one of the best ways of teaching.

Thrill of playing in colleagues’ classes

I still freelance though less now as I’m teaching full-time. I’ve performed at the Barbican, on BBC radio, and with the London Philharmonic orchestra and I’m trying to build up my career as a musician as well, performing bits and bobs, playing in bands and giving solos like other lecturers in my college. One thing I really enjoy is sharing music with my fellow lecturers, performing in their classes, introducing students to new playing techniques.

What would I have done differently so far?

If I’d had more time to prepare, it would be more precise lesson planning and research on BTec level 3 and HE levels 4 and 5. The learning path I’ve been asked to follow is quite open - but it’s hard to narrow down my ideas until I know the students well. And if in future I could observe someone else teaching my classes, I’d get a much better understanding of who the students are.

Early lessons in thinking on my feet

Already, I know I have to be versatile and think on my feet. I’ve quickly had to change my lesson plan during one session after noting learners’ reactions. So instead of continuing to show them just one video performance, I’ve shown several of the same piece of music - some crazy, some abnormal, some even ‘shocking’ for the students.

Again, this week with HE students I was focusing on the evolution of the guitar. I’d run out of content earlier than expected and had to fill time with more insights into the guitar and its history. I quickly found a documentary about flamenco that would inform about Middle Eastern/Arabic/Moslem cultural exchange with Spanish gypsy culture. If I can incorporate good video material into a lesson, I’m quite happy to stop talking myself.

I’ve realised the real point of being physically present in class as opposed to being online. I can impart extra knowledge and my own reflections as and when; it’s not just about following textbooks.

During a three-hour band jamming session with a group of three BTec students, they ran out of ideas about what to play, and we wasted precious time trying to decide on the repertoire. One asked if I could do one-to-one sessions next time. I just hadn’t known that was their expectation; I had wrongly thought that less of a structure for practical lessons would work best. I’d expected too much of them. Next time I’ll prepare the session differently.

I’ve also realised, particularly with younger students, that I have to be crystal clear from the start about my expectations in class and what they may and may not do. And yet whatever the message or lesson content, I have to convey it in an adult manner - that’s what helps make FE teaching so fresh and different. 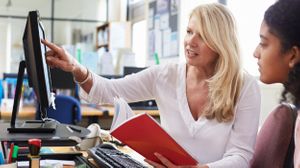 How to get a student services administrator job Read more How to land a learning support job Read more How to become a college head of department Read more