Black History Month gives an opportunity for colleges to focus on what really matters - how to ensure that every student and staff member reaches their full potential . . .

This month, FE colleges mark the UK's 33rd consecutive Black history month – a nationally recognised series of events at the start of the new academic year when students come back fresh to learning and many African countries celebrate harvest.

It was launched by Ghanaian political refugee Akyaaba Addai-Sebo in 1987 to promote a greater sense of identity among the African diaspora in the UK and champion their history and achievements. Now FE colleges are once again being invited to highlight their own efforts to create a level playing field of job opportunities for all minority ethnic groups and to strengthen students’ sense of their own worth in a multicultural society.

How level is your playing field?

So just how level is the playing field in our colleges? What is the representation of black and minority ethnic students and teaching staff? What initiatives are being taken by colleges to increase opportunities for talented teachers to move up the leadership ladder?

At present, according to Association of Colleges 2019-20 data, 26% of 16-18s and 32% of adult students, along with 16% of all full-time staff (teaching and non-teaching) are from black and minority ethnic backgrounds. The figure is 11% for college chief executives and principals.

Much can happen in three decades, no more so than now. “There’s a real sea change at the moment due largely to the Black Lives Matter (BLM) movement and the unjust killing of George Floyd in the US, which has touched many people,” says Rijinder Mann OBE, a long-time campaigner for equal opportunities in post-16 education.

Currently vice-chair of governors at Burton and South Derbyshire college, Rijinder highlights the continuing need to promote black leadership training opportunities. As a founding member (1998) and later CEO of the Network for Black and Asian Professionals before it closed due to lack of funding in 2016, she cites some revealing yet little known research data showing that across 1998-2020 just 32 FE principals - and not at any given time - were from minority ethnic backgrounds; of these, 24 took part in Black Leadership Initiative (BLI) programmes backed by the network. “The highest number in post at any one time was 17 in 2013.”

Organisations like the Association of Colleges (AoC), long-time supporter and instigator of leadership training for minority ethnic staff, are only too well aware of the gap in current provision.

FE colleges are always seen as liberal and open-minded, according to Kirsti Lord, AoC’s deputy chief executive and lead on equality and diversity. ”But for too long parts of the sector have ignored the barriers many black students and staff face, or failed to understand them. We recognise that the proportion of black leaders has dropped across the sector, and if we want our colleges to reflect the societies they serve, then we must work to change this.”

“We have now convened an equality, diversity and inclusion steering group that brings together expert voices from across colleges and the wider sector to increase the diversity of leadership and governance in the sector… including influencing the Department for Education on policy and the Education Training Foundation on development and sharing best practice.

“We are about to publish an action plan… We need urgent action to fully understand the experiences of black staff and students and to address the low proportion of black leaders. We still have a long way to go.”

The current high profile of the Black Lives Matter campaign has also helped in the birth of another initiative - the Black Further Education Leadership Group (BFELG) - formed by a number of existing and former college leaders. In an open letter to the prime minister they have, among other recommendations, spelled out the need to rewrite parts of the curriculum to reflect the effect of colonial history on society and to incorporate racial equality in future staff development training programmes.

One successful beneficiary of the earlier BLI training is high-profile campaigner Anthony Bravo, black principal of Basingstoke College for the past 11 years. “It was the first time many of us had been given such a development opportunity. It was critical for me - if it not been for the money gathered by the network to enable me to do that course I would not have become a principal.”

Anthony counts himself lucky. “Ten years ago there were around 15-20 non-white principals; now it’s under 10, with some 3 or 4 of Afro-Caribbean origin and the others from Asian or other minority ethnic groups.” The closure of the network due to lack of funding is a key factor in the decline in numbers, he says, which is why the need is as acute as ever to continue campaigning for more funding.

"The course enabled me to do things like shadowing and getting Ofsted training which allowed me to progress and get the best all-round set of experiences.” He says on current leadership courses without a specific focus on minority ethnic participation, non-white candidates lacking management experience may find it more difficult to get a place.

‘Everyone gets a fair crack at the whip’

“As a principal, the most important thing I do is ensure everyone from all ethnic groups has a fair crack of the whip.” Anthony admits he keeps a high profile in his wider community, counting being chair of the local Basingstoke strategic partnership, a local hospital governor and a rotary club member as ways of keeping the college fully integrated at senior levels across the town.

“Everyone knows us. After a while most people just get to know Basingstoke is a really good college and don’t even see my colour. You almost literally under-promise and over-deliver. You just have to. In some places not everyone is valued the same and then they don’t think they can stand up and say things, but here it doesn’t matter who you are; if you have an issue, my door is always open. I can see right out into the corridor!”

How is the college marking Black History Month? “We have an array of guest speakers coming in, there’s a lot on social media and it’s all part of our tutorial process. Teachers focus on asking students to ask themselves what is acceptable and what is not. In my college, a rural, predominantly white environment with just 2% minority ethnic students, you have to do it by self-reflection.

“You have to be very sensitive - because in most classes if there is a black student, it’s normally just one - if you start a discussion in a certain way you can build up resentment from a majority and may end up [inadvertently] penalising, even marginalising, that individual.”

Everyone needs a sense of security

Another black leader, Yvonne Kelly, principal and CEO of Barking and Dagenham College, identifies Anthony’s example of a student on their own with the man who once walked into an all-female engineering conference and started desperately trying to gravitate to the other side of the room to get a feeling of security.

How has she improved equal opportunities for non-white staff? “I’m fortunate to work in east London; it’s a very diverse environment which is one of its strengths. All our processes reflect diversity, including our workforce. It’s now rare to see an all-white job applicants list. We recruit people with the right fit. You don’t see the colour.”

One problem is lack of sufficient research and this leads to a lack of understanding. “No one’s looking at data. To develop leaders we have to focus on that, highlighting the needs of different cultural groups.

“You can’t treat everyone the same. We take a different approach to individual learners so we need to do the same with staff.” 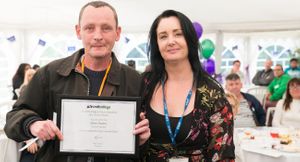