A love of history and hairdressing got Dawn Richardson involved in theatrical make-up, when she was asked to turn ‘extras' into battle scene victims during TV filming with her family’s successful historical reenactment society. She’d entered the fascinating world of prostheses, camouflage and make-believe where everything was not as it seemed . . .

Emily: Even though the course was sometimes difficult and you felt you were not doing well, Dawn would always ask how she could help you progress. I struggled a bit with hair and applications but she gave up her lunch hours to help me write up notes and practice; she made sure we were all confident in what we did. In fact, I’ve not been worried about my exam results; she’s been so supportive and the best tutor I’ve ever had . . . like a college ‘mum’ who made sure we were all included and happy. We loved her to bits.

Teegan: Her lessons were never boring. I joined the course six weeks late after switching over from hairdressing. Dawn told me it would not be easy to catch up but she saw potential in my portfolio, encouraged me and without her support I would not be where I am now. If we didn’t get something first time she’d always put it in a different way that we’d understand. During the Covid lockdown, she’d regularly make online group calls to ensure we were all ok. I’m not so good online as I like people around me but regular calls from Dawn helped me stay on task.

Jessica: Dawn is quite open-minded; she’d never tell you outright if you were doing something wrong but would help you tweak your original idea to fit the brief better and speak in language that teenagers understand. She’s also very observant; I’m a young carer and she’d quickly notice if I or anyone else was upset and knew how to help us very quickly. If you needed to do extra practice, she’d make sure models were available to practice on and saw her role as not just teaching the course but helping shape our future careers.

From a young age Dawn Richardson loved hairdressing - but she was also into history. She worked first as a hairdresser and make-up artist, and then joined her family’s newly launched ancient history reenactment group. In 1991, the group was approached by the History Channel and BBC to work on documentaries. “With my background, they asked if I could make all the extras on set look like they had been in battle,” says Dawn. She grabbed the chance and went freelance in media make-up and hair.

Then in 2008 family responsibilities and a seasonal lack of summer work saw her take up a part-time technician’s job in a local college’s hair and beauty department. “I sort of fell into teaching! It wasn’t planned as I was happily working in the industry. But at my first interview, I was asked if I might also consider teaching because of my experience.” A year later Dawn started taking classes, later taking her assessor’s award. “I filled in for two people when they got sick and then covered for maternity leave. In 2011 I transferred to HSDC as a part-time lecturer while continuing to run a small beauty salon. Juggling both jobs didn’t really work, though, so about three years ago I gave up the salon and went full-time as a media make-up lecturer.”

Students entering competitions, such as the international World Skills championships, going on to higher education and getting jobs in the industry are always highlights, says Dawn, but one of her biggest challenges and successes this year has been putting the whole course online during lockdown.

“We’ve had to be creative. At college, you have all the materials, equipment and prosthetics you need but being at home and making videos for your lessons mean you have to use things around the house that your students can also use!”

Learning how to talk over PowerPoint presentations PPP) was hard at first. “When pre-recording your voice you must think outside the box - the students need the underpinning knowledge you normally pass on in face-to-face conversations - eg: ‘Do this way because, if you don’t, this and this could happen …’ - but using PowerPoint is basically script reading - it’s quite challenging initially - I tried to make the content downbeat and still pass on the knowledge they need behind the theory.”

Quizzes are one way to get feedback

“Students say they listen but you can tell when they start submitting work if they have taken it in, and not just read it from a textbook or googled. I always try to do quizzes for feedback … I also put passwords on my PPP documents so I’ll know as and when they have been opened!”

Online welfare concerns meant no videoconferencing was allowed with students in their homes; everything was via text messages and Word documents, so Dawn had to read between the lines to check if her students were working to her specs or digressing. PPPs had to be kept to 10-15 minutes to break the subject down into manageable chunks.

For Dawn the first two weeks of lockdown were crucial - 100% attendance at the start dropped off a bit as there was no online voice to check up and chase the students. But once protocols were put in place voice - but not live video - was allowed.

‘I see a face as a blank canvas’

What about online learning’s role in a lockdown-free future? “Some 30% of my lessons will be online as it is so much easier to deliver - it will help students retain the knowledge as they can refer to the voice recordings to see what was said and happened in the classroom.

“Make-up gives me the chance to create something - we see a face as a blank canvas and then build on it. My main interest is probably camouflage make-up. Maybe someone wants a wine stain, a stroke or other marks so they can feel more reassured and confident about going out.

What techniques work best with students? “I always share experiences and give them stories of things going wrong! I make sure I’m aware of what is going on in their lives and get them all involved in conversations. And I’m never miserable in a lesson!”

Learn the science first and then specialise

So what sort of things does Dawn teach at level 3? Some of her students (mostly aged 17-30) focus on cosmetic science; some major in camouflage; others on special effects - they will work with a rescue service such as the police that runs ‘emergency’ sessions on the forensic side or with people with injuries, such as amputees from a helicopter accident, who are happy to model for the students. Or they opt for photography and airbrushing, or wig-making. However, most students will try the fashion route first before working out where they are best comfortable.

A key part of a make-up artist’s armory is knowing what will happen if you mix different products and how they physically affect different types of skin - if, say, the products dry out the skin; which combinations produce unwelcome flashback under camera lights and so on. “Students learn the science first, followed by anatomy and physiology, and only then specialise.

“And unlike in industry, where you expect something to be done when you ask, step back and treat them as individual learners rather than a group (as in school). Explain things first and ensure they all understand before moving on. You have to justify why things are done in a certain way. This approach makes me reevaluate every lesson. Do I need to change it or go over it again? I challenge everything I do.”

Avoid the domino effect of a flagging student

Potential lecturers should ask themselves if they are willing to go over something repeatedly and be patient enough to accept that not everyone learns at the same rate.

“But you also cannot allow anyone to flag in a lesson as it will affect the whole group. So I will always ask a flagging student what have they been creating recently, can I help them at all? Have they tried such and such brand - and, if not, shall we give it a go? And then do it there and then. That way the rest of the class gets interested and you avoid a domino effect!” 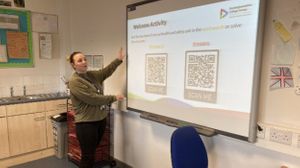 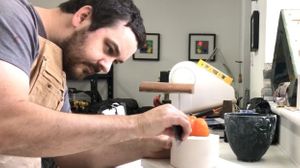